Welcome to a new film review blog from Ken Burke and Pat Craig, who work and live in the East Bay across from San Francisco.  We know that the world is full of opinions on movies, but ours are just too good to keep to ourselves (or so we’ve been told ... by each other; we’ll see how that works out for you).  Because we don’t have the burden of newspaper or magazine deadlines we’re taking the option of posting reviews either as currently as we can upon a film’s release or waiting to give it some perspective after it’s simmered in the cultural stew for awhile.  Sometimes both of us will review the same film whether we agree or not, sometimes we’ll explore separate topics as our time and interests allow.  We’ll post reviews whenever we can, but given the distraction that comes from having actual jobs (how 99% of us!) we have no set schedule and won’t even attempt to cover everything in current distribution, just what we can get to within our other limitations.  If anyone has any recommendations for specific films you’d like us to analyze, either now playing or on DVD, please give us your suggestions and we’ll see what we can do (but no promises, unless your request also includes a well-stuffed-envelope of unmarked large-denomination-coin-of-the-realm).

We’re happy to hear from anyone in response to our reviews, but we’d prefer constructive dialogue rather than dismissive insults—or at least get enough humor in your insults so we can sell them on eBay.  Thanks for spending some time with us and feel free to suggest other blogs that you think we should link to.  We're also willing to improve the appearance of the blog as long as someone will loan us a small child to do the work because that way it'll be more efficient and effective.

Spoiler Alert!  We’re going to discuss whatever we think is relevant in our reviews which might include important plot points because we want to address whatever we think is necessary in the films and we’ll assume that you turn to us for commentary and dialogue rather than a “preview review” to help you decide what to see on opening weekend.  We won’t be repeating this alert in each review so please be forewarned before you read. 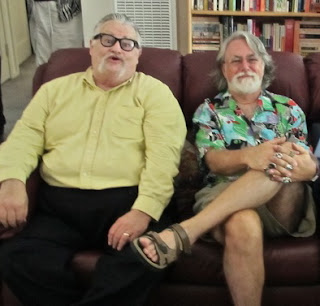 Bio of Ken Burke  (on right in photo) Ken is originally from Texas (keyword, from, with apologies to family and friends) but has been in the Bay Area since 1984 having worked in various teaching and media production jobs. One of the few he hasn’t been fired from is at Mills College in Oakland, CA where he’s been since 1987, now as a Professor of Film Studies and Art & Art History.  He’s explored a wide variety of visual images from painting to photography to multi-image slide shows to video as a producer and analyst (and won a few awards along the way for some of it) but lately has concentrated on teaching history, theory, and criticism of film and television.  In the late 1980s and early ‘90s he was a film critic at a radio station and a cable TV channel in Dallas and finally decided to again devote some energy to writing about films as well as watching them.  Ken offers thanks to his wife, Nina Kindblad, and her well-placed elbow which has kept him awake during countless screenings, both domestic and international, with additional thanks to Nina for serving as the final proofreader of his never-ending ramblings (a word [or more] of advice here: don't start reading Ken's reviews if you're in a hurry, come back when you have time because you'll need it; also, don't be surprised that he rarely rates anything above 4 stars as he saves the higher rankings for truly significant films, which he doesn't think occur very often except for the true classics).

Bio of Pat Craig (on left in photo)  Pat has worked for newspapers as a theater critic, TV critic and occasionally a movie critic, along with other, much less interesting journalistic jobs—he has no ambitions to save the world, although he would like to make the world safe for smart goofball comedies. Pat is also a fiction writer, currently working on a series of murder mysteries set in San Francisco during the '30s and, if things work out, '40s. Not surprisingly, his hero is a newspaper reporter. Pat has won a number of awards for writing, including some big deal national ones. But when he looks at them hanging behind a door upstairs, all he can think about is that scene in The Pawnbroker when the kid tries to pawn his speech trophies. Outside of that, he is married, has a kid, a mortgage, and a Super Saver card at Safeway.

And, due to blog formatting restrictions, we'll have to add here for Profile completeness that Pat is a Scorpio (as Ken learned in Texas, you should always check your shoes to make sure there's not one in there before you put them on ... oh, wait, that's a scorpion; never mind).


Speaking of formatting restrictions we’ve found that some web browsers don’t always display exactly what was originally created by us on a Mac through Safari so if some display glitches pop up in non-Safari browsers or due to older versions of browser software, or even because you're using a PC vs. a Mac, please don't be too harsh in commenting on our lack of editing because we can't control what looks fine in one version but comes off a bit sloppy in the others (to the various competing manufacturers of computer hardware and software responsible for these competing inconsistencies we quote George Taylor [Charlton Heston] in Planet of the Apes [Franklin J. Schaffner, 1968]: “Ah, damn you! God damn you all to hell! ... You damn dirty apes!”)—and there's always the problem of websites we might refer you to that disappear later, another situation totally beyond our ability to monitor although we'd appreciate being informed about this so we can try to find a substitute.  But if something just isn't making sense, in form or content, please post about that and we'll do our best to clear up confusions—assuming we have any hopes for that to begin with.  Thanks in advance for your input, whatever it may be and however often you'd like to contact us.


***Google RSS Feed Alert!***  To get notifications about new postings to this blog via RSS feed we encourage you to visit the actual site of the feed (rather than its downloads in various websites) located at feed://filmreviewsfromtwoguysinthedark.blogspot.com/feeds/posts/ default; for us on a Mac this link opens easily with Safari, Firefox, and Google Chrome (those are the only ones we use; also, for us at least, Chrome somehow opens this link in Safari so maybe that's that a corporate-connectivity thing that we mere mortals need not concern ourselves with), but if it doesn’t open as a direct link for you just copy and paste this site to the URL bar of your web browser and click in.  This copy/paste method also works fine for us in Safari and Firefox (Firefox even automatically allows you to set up a link to the good version of the feed) but seems to be inconsistent via Google Chrome (Go figure!  You may have also figured out that we've added these RSS comments after we'd done a lot of postings ... although it would have been fun to have you think we could see into the future.  In truth, we do our best to barely navigate the present, so please bear with us as it's difficult to see too well in the dark.)

Please work directly with the best version of the feed as indicated above for more accurate information on what we publish on roughly a weekly basis.  Sorry for all of this complexity, but we have little control over the intricacies and craziness of cyberspace.


AND NOW, THE REVIEWS, which you find in the Blog Archive on the right side of this page ...

Please note that to Post a Comment you need to either have a Google account (which you can easily get at https://accounts.google.com/NewAccount if you need to sign up) or other sign-in identification from the pull-down menu below before you preview or post.


If you’d rather contact Ken directly rather than leaving a comment here please use my email address of kenburke409@gmail.com.  (But if you truly have too much time on your hands you might want to explore some even-longer-and-more-obtuse-than-my-film-reviews—if that even seems possible—academic articles about various cinematic topics at my website, https://kenburke.academia.edu, which could really give you something to talk to me about.)


By the way, if you’re ever at The Hotel California knock on my door—but you know what the check out policy is so be prepared to stay for awhile.    Ken


We encourage you to visit the summary of Two Guys reviews for our past posts.*  If you’d
like to Like us on Facebook please visit our Facebook page. We appreciate your support whenever and however you can offer it!  (Obviously, these links were added to this page
and to the ongoing flow of our postings long after we launched the blog.)


*Please ignore previous warnings about a “dead link” to our Summary page because the problems’ been manually fixed so that all postings since July 11, 2013 now have the proper functioning link.

P.S.  Just to show that Ken hasn’t fully flushed Texas out of his system here’s an alternative destination for you, Home in a Texas Bar, with Gary P. Nunn and Jerry Jeff Walker.  But wherever the rest of my body may be my heart’s always with my longtime-companion, lover, and wife, Nina Kindblad, so here’s our favorite shared song—Neil Young’s "Harvest Moon"—from the performance we saw at the Desert Trip concerts in Indio, CA on October 15, 2016 (as a full moon was rising over the stadium) because “I’m still in love with you,” my dearest, a never-changing-reality even as the moon waxes and wanes over the months/years to come.